History of the Canyons 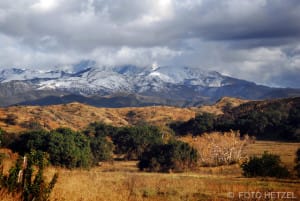 Over 75 to 80 million years, the slow, steady downward dripping and lateral cutting of water carved out the rugged canyons. On the cliff faces, iron rich minerals leached out by water produce stunning red stains. Combined with yellow and brown sandstone and finer-stained gray mudstone and shale, they paint a colorful palate on the canyon walls.

Within the canyons, geology students, or Rock Kickers as they are known by the locals, will find excellent examples of exfoliation, in which rock layers peel back like layers of an onion, and of frost wedging, in which ice trapped in a crack expands to split a rock. Archeology students will see fossils of millions of clams, snails, and small-shelled, squid-like creatures[1] left behind during the five times that seas washed over the ground.

Appearing more than 12 million years ago, the highest points surrounding the canyons are Santiago Peak at 5,691 feet and Modjeska Peak at 5,481 feet. Together the pair forms “Old Saddleback,” an easily recognizable landmark. 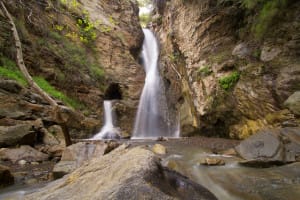 The first people to live in the canyons were Native Americans. They arrived to find dense woods filled with live oaks, sycamores, mountain ash, and pines buffeted by winds. Dependent on acorns as their staple food, the Native Americans cut paths through the wilderness to reach oak groves. After collecting the acorns, they carried them to canyon streams and immersed the nuts in the running water to leach out the bitter tannic acid. Once done, they carried the acorns to a large boulder or rock outcropping, where they used mortars to grind the nuts into powder. Over open fires, they cooked a porridge called “atole.”

Today rocks marked by mortars abound in Black Star and other canyon areas. Two huge boulders pitted with holes now belong to the Bowers Museum in Santa Ana, CA; a third is in Orange County’s nearby Irvine Park. But hikers can still find grinding holes throughout the canyons.

The canyons first appear in historical records in 1769, when the Governor of Lower California, Senor Don Gaspar de Portola, a former explorer, celebrated Saint Anne’s feast day on July 26th in the foothills. He called the area “Canyon de la Madera,” or “Canyon of Timber.” At the time, the Spanish had received land grants in the canyons from the Spanish and Mexican administrations. They grazed their cattle and horses in its fields and logged its trees to build their homes and missions. Much of the San Juan Capistrano Mission, for example, was made with canyon timber. But the land holders didn’t construct their own homes in the canyons---at the time, the only residents were the Native Americans and Mexicans guarding the grazing animals.

The canyons achieved notoriety in 1831, when Black Star was the site of the last Native American massacre in southern California. It occurred after mountain men slaughtered a group of horse thieves they had tracked from Los Angeles. Today the site is Registered California Historical Landmark Number 217 and Orange County Landmark Number 93. In 1857, a posse chasing a highwayman who had killed a sheriff found a cluster of Indian caves outside Modjeska Canyon. Inside were stunning baskets that now reside in the Bowers Museum. 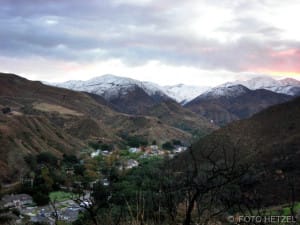 In 1860, William Wolfskill bought the Rancho Lomas de Santiago at the entrance to Silverado canyon. He became a leading horticulturalist and developed California’s first orange grove. Soon after, the first homesteader, Sam Shrewsbury, took up residence. An avid beekeeper, Shrewsbury launched the local commercial production of honey. Because of the canyons’ assortment of sages-- from white to black to purple to buckwheat—the honey reflected a feast of flavors and hues. Shrewsbury also prospered from collecting limestone and burning it for construction use. During the 1870’s, homesteaders trickled into the canyons and before long almost every canyon housed a handful.

But the relative quiet didn’t last. In 1877, Santa Ana residents Hank Smith and William Curry were hunting in the mountains when they spotted a rock that looked like silver ore. They took it for tests, which came back positive, assaying at $60 a ton. They staked a claim and dug a tunnel. A newspaper got wind of their find and within a week, 250 to 300 men had rushed into Silverado. Eventually 500 claims were filed.

A year later, coal was found near the canyon’s entrance. The 900-foot shaft of the Carbondale mine soon yielded six to ten tons daily.

Two boom towns arose—one centered on silver and the other on coal. The canyon’s population reached more than 1,500 and the area included three hotels, three stores, two blacksmiths, two meat markets and seven saloons. The canyons even had two post offices—one for Carbondale and the other for Silverado. Three stagecoaches traveled daily to Santa Ana and two to Los Angeles.

The boom, however, was short-lived. By 1881, Carbondale closed. Two years later, Silverado faded as well. Brush soon covered most of the trails and openings. Today the Carbondale site at 8002 Silverado Canyon Road is Registered State Landmark Number 228.

In 1888, the canyon area again rose to national prominence when the famous Polish actress, Helena Modjeska (1840-1909), bought 16 acres in what is now known as Modjeska Canyon. She hired one of America’s leading architects, Stanford White, to design a large country house with Victorian accents. Modjeska filled the house with antiques, planted rows of olive trees and installed gardens that resembled the Arden forest in Shakespeare’s play “As You Like It.” Modjeska sold the house in 1907. In 1986, Orange County Harbors, Beaches and Parks purchased it and established a Historical site. Under the county’s ownership, a limited number of visitors are allowed on tours. Modjeska House is the only surviving structure on the West Coast designed by White; he later oversaw the 1900 restoration of the White House and he was the architect for Madison Square Garden in New York City.

About the time that Modjeska bought her property, the U.S. government conducted a survey of the surrounding forest. In 1893, a Presidential proclamation established the Trabuco Reserve, the first step towards creating a national forest. In 1908, President Theodore Roosevelt named 122,163 acres in honor of former President Grover Cleveland. Today the 567,000 acre Cleveland National Forest extends from within five miles of the Mexican border north 135 miles. Its western edge zigzags, running from six to 60 miles inland from the Pacific coast.

By 1900, except for the mining district, only five homes remained in Silverado Canyon. In 1901, Joseph Holtz purchased a 112 acre ranch just past remnants of the Carbondale mine. A year later, the Orange school district paid $50 for one acre and built the canyon’s first school. In 1904, Holtz constructed his home. Over the next 80 years, his family grew wheat, barley, alfalfa, English walnuts, avocadoes and a variety of fruit. At one time, they had 160 bee colonies, ten acres of barley, three of wheat, three of corn, ten of alfalfa and one acre of fruit trees. They also had a dairy and creamery and raised turkeys and chickens.

From 1920 until the mid 1950s, silver mining resumed at the Blue Light Mine at the end of Silverado Canyon. The Blue Light Mine (later known as the Silverado Mine Company) produced $47,000 worth of zinc, lead, gold and silver from 1942 to 1946. Until recently, mill relics remained near the National Forest gate. 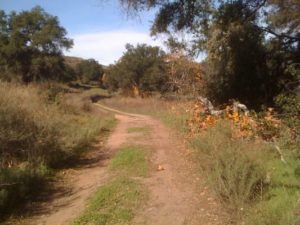 In the 1920s and 30s, Los Angeles residents discovered hot sulphur springs in Silverado canyon. Advertisements recommended the dry, moderate Mediterranean climate for relief of asthma, respiratory infections and arthritis. Families with sick children built cabins in the area. In 1929, the log cabin housing the Silverado Post Office also became home to the first local public library. In 1931, a dam to supply drinking water to nearby towns created Irvine Lake near Silverado’s entrance. Over the years, the number of houses slowly grew.

In 2005, a 16-year-old Orange County girl was killed when rocks and mud hit a small market and home in the middle of Silverado Canyon near the fire station where 11 people had died in the 1969 mudslide. Caitlin Oto was working on the computer in her bedroom in an apartment above the Shadybrook Country Store when boulders and rocks crashed through the roof and walls. She died at the scene. Her mother and stepfather were not harmed. Caitlin's death has been marked by a rock memorial. Longtime residents said the store had been hit by falling rocks and mud at least three times in the last decade or so. The home next door was destroyed in a slide four years earlier.

In December 2011, a mudslide destroyed the home of Connie Carter mid-way in Silverado Canyon. After heavy rains, mud and debris rushed down a hillside on the south side of the canyon to bury the outside of her home up to the eaves and burst through windows to cover every room inside several feet high in mud.

In 2007, the Santiago Fire broke out, set by an arsonist who was never identified. The blaze originated near Santiago Canyon Road near the entrance to Silverado Canyon at 5:55 p.m. on October 21, 2007. Fanned by Santa Ana winds, it burned approximately 28,445 acres and threatened roughly 750 homes. In the end, 13 homes burned, all in the area of Modjeska Canyon. Many residents were evacuated for two weeks. The fire became fully contained on November 9. After the fire, Orange County changed its firefighting practices to call in more helicopter support and do it earlier. 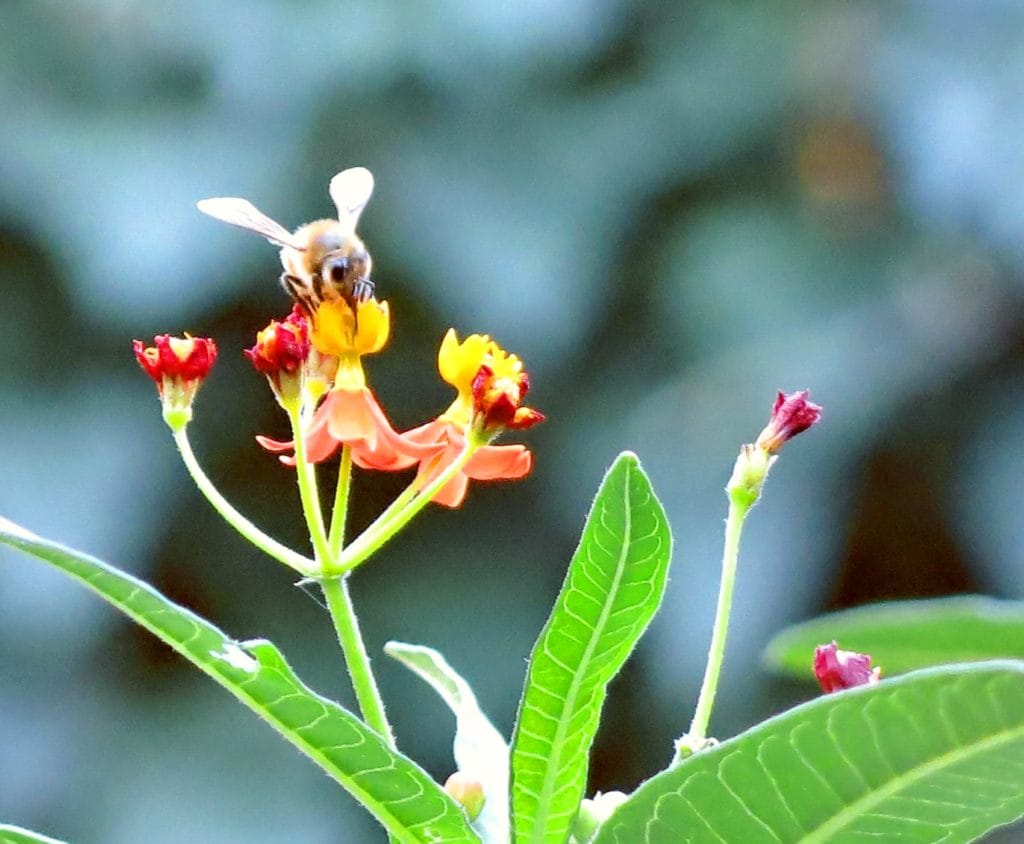 In 2012, the Norbertine Fathers of St. Michael’s Abbey bought the 320-acre former Holtz Ranch at the entrance of Silverado Canyon to relocate its abbey from Trabuco Canyon where it had been since 1961. The 124-acre campus will include a new monastery, small convent, school with student dorms for a maximum of 100 students, chapel, athletic field, storage area, maintenance area, guest cottages and cemetery. By 2017, grading had been done but no structures built.

In 2014, a brush fire in Silverado Canyon burned out of control, blackening more than 1,600 acres in steep terrain, heavy brush and near triple-digit heat, forcing mandatory evacuations of about 30 homes. The fire grew rapidly after breaking out about 10:30 a.m., sweeping up the north side of Silverado Canyon, away from homes and into the remote expanses of the Cleveland National Forest. About 30 homes were evacuated. The fire was started by sun glinting off a metal planter into severely dry brush.

In 2017, the Orange County Polo Club purchased and renovated the former Carbondale Ranch at the entrance of Silverado.

[1] W.P. Popenoe (1937) studied the Upper Cretaceous fossils of the canyons. In Modjeska Canyon, many of the fossils are internal molds of clam and snail shells. Baker Canyon sandstone contains a distinctive fauna of thick-shelled mollusks. Directly overlying the sandstone is the Holtz shale member of the Ladd Formation, in which the lower part is a rich molluscan fossil assemblage. It includes diverse clams and snails and rarer specimens of squid-like ammonites. 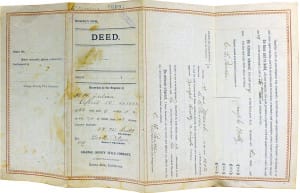 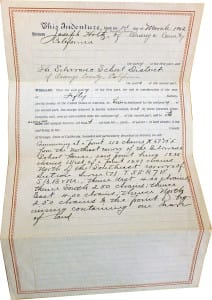